Running your own Ansible playbooks upon ManageIQ/CloudForms provider event opens unimaginable possibilities to automate your data centers. This blogpost and accompanying YouTube video is a step-by-step tutorial that will show you how to unleash the power of Ansible within CloudForms. Our example is based on Nuage Networks provider and focuses on triggering a playbook executed when a “new enterprise was created” event occurs on remote server. The playbook connects to the remote server and automatically provisions a dozen of entites in the newly created enterprise.

We’ll focus mostly on explaining how our auxiliary Ansible role works in this blog post. But you can skip directly to the CloudForms: Ansible Playbook as a Callback to Nuage Event video where we demonstrate the entire integration from zero to the state where the playbook gets triggered upon the event. Here’s the agenda: 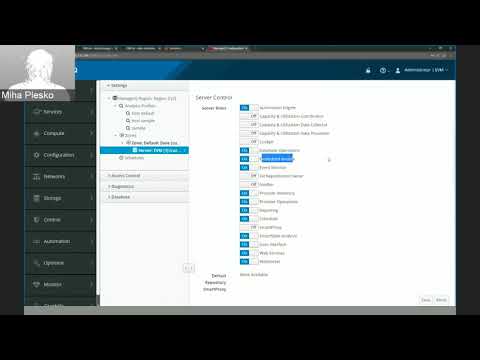 Nuage Networks asked us to help them integrate their software-defined networking (SDN) solution into ManageIQ. One of their top priority requirements was the ability to run the custom workload based on events emitted by the Nuage server, preferrably the workload written in a form of Ansible playbooks.

There were more specifications to it: the playbook had to be able to access JSON payload that the event was emitted with, as it contains vital information which may influence what actions the playbook runs.

Furthermore, the playbook had to be provided with the five Nuage credential variables that are required by the nuage_vspk Ansible module:

The five credential variables are necessary to authenticate against the Nuage server and manage it e.g create a new router, create a new subnet etc.

Turns out ManageIQ was already able to consume events from the Nuage server and was therefore able to execute different Automation Instances based on event types - so we had 90% of the requirement done for free :)

The Automation Engine, moreover, feeds Instance with the entire event data upon execution so we only had to somehow grab it from within the playbook. Similarly goes for Nuage credential variables - it’s easy to specify custom attributes on an Instance, even the encrypted ones, for example:

And those custom attributes are all present when the Instance runs. It’s all there somewhere, but where exactly?

So the only missing part was a glue between the Automation Engine and the playbook: both - JSON payload of the event and the Nuage credentials attributes - had to be consumed somehow by the playbook.

Spoiler alert: the missing part is implemented by means of ManageIQ RESTful API.

Yeah so we provided a new Ansible role, xlab_si.nuage_miq_automate, to perform the interaction between the Automation Engine and the playbook by means of ManageIQ RESTful API. The role silently carries out the communication and yields two simple yet useful variables to the playbook: nuage_auth and event.

The rest of the blogpost describes how exactly the role works and eventually demonstrates how playbook writers can use it in their playbooks that are hooked to Nuage events.

How the Role Works

We developed a new role, the xlab_si.nuage_miq_automate, which consumes the ManageIQ RESTful API to obtain desired data. Merely two API requests are needed:

And to make things dead simple there is that syncrou.manageiq-automate role available at the Ansible Galaxy portal. It’s an official ManageIQ role that promises ease of access to the Automation Workspace. And man do they keep the promise!

So in our new role, we rely heavily on the official syncrou.manageiq-automate role which makes fetching Nuage credentials from Automation Instance attributes as simple as it can get:

The manageiq_automate module is part of the syncrou.manageiq-automate role and in the example above we use it five times to fetch all Nuage credential variables from the Automation Workspace. Eventually, we pack all of them in a nuage_auth variable which is directly consumable by whichever playbook required the role.

Here, too, we make use of the syncrou.manageiq-automate role to fetch the EventStream record and then extract its JSON payload into a variable called event.full_data:

And that’s it, that’s all what our brand new xlab_si.nuage_miq_automate role does! It provides you with nuage_auth and event variables that you can use in your custom playbook.

Below you can find an example playbook (taken from example repository) that can be assigned as a callback to the arbitrary Nuage event, e.g. nuage_subnet_create. It first requires the xlab_si.nuage_miq_automate role to get nuage_auth and event variables populated. Then it logs them both. Eventually it performs some simple interaction with the Nuage server using nuage_vspk Ansible module - namely, it fetches the entity that raised the event - and logs it.

The example playbook above demonstrates how trivial it is to run your custom workload upon the EMS event. Having the xlab_si.nuage_miq_automate role required you don’t even need to worry about Automation Workspace etc. and instead focus on implementing whatever the playbook is supposed to do.

In this blog post we focused on explaining how the xlab_si.nuage_miq_automate role works and how can it be consumed by playbooks. Check out the CloudForms: Ansible Playbook as a Callback to Nuage Event video where we demonstrate the entire integration from zero to the state where the playbook gets triggered upon the event.

Need support getting your Ansible playbooks work with ManageIQ/CloudForms? Get in touch with us and we’ll be happy to help you out. Just drop an email to our Steampunk team steampunk@xlab.si or visit us at steampunk.si. Additionally, you can ping us on Twitter or leave a comment on Reddit.

Thank you for subscribing!

This could be interesting for you

ManageIQ and Redfish, sitting in a tree ...